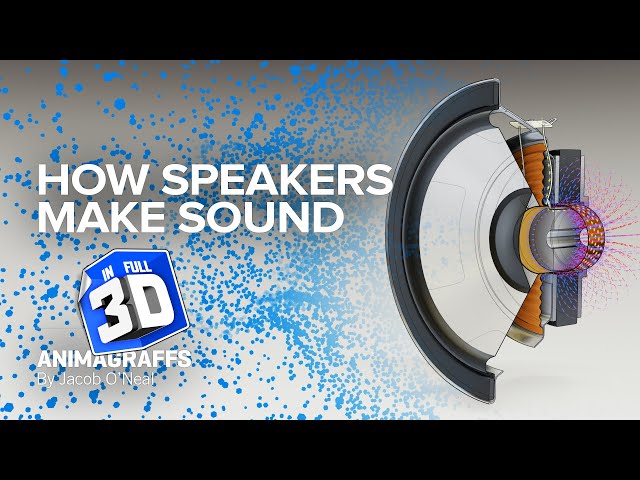 This is a fantastic educational video.
Credit to “Animagraffs by Jacob O’Neal - animagraffs.com

i'm jake o'neil creator of animagraphs and this is how speakers make sound.

The basic speaker design has a motor that drives the speaker back and forth attached to a cone to translate this movement into pressure waves that travel through the air. The motor, a voice coil and magnet work together to form the speaker motor.

The voice coil has a long section of thin copper wire wound many times around a heat resistant cylinder called the former. When electricity flows through the copper windings, it naturally generates a surrounding magnetic field. This phenomenon is what makes an electromagnet.

An electromagnet can act just like a permanent magnet and yet incredibly its polarity or positive and negative pull orientation and magnetic intensity can be changed by altering the supplied electric current. It can instantly be made stronger or weaker, reversed or turned off completely.

A large permanent magnet, or natural magnet, surrounds the voice coil. This magnet has a top plate and a backing plate with a pull piece through the center to focus the magnet's field through the gap. An intricate electrical signal flows through the voice coil windings causing it to move back and forth as its magnetic field pushes and pulls against that of the permanent magnet. This electrical current is a precise replica of the audio that was originally recorded. In fact, the entire sound is contained.

The cone translates voice coil movement into waves that travel through the air it has its own flexible suspension system made up of the surround on the outside and the corrugated spider at its center. The dust cap keeps debris and unwanted material out of sensitive internal areas. Underneath the dust cap the voice coil's copper leads attach to more flexible wires called, tinsel leads, that can smoothly deform with intense speaker movement recreating the whole symphony.

If a speaker only moves back and forth how does it reproduce an entire symphony of sounds at the same time? Let's look at basic sound wave operation, air is an elastic medium. Meaning that it returns to its original shape once an acting force is removed.Sspeakers push and pull air molecules making them ram into each other in a domino effect. This wave reaches and moves your eardrum which sends a signal that your brain interprets as sound you could even say that hearing is just movement detection.

While it's often easier on paper to draw waves as a bouncy line in reality sound waves are three-dimensional areas of high and low pressure. When we turn up the volume, the speaker pushes harder sending more forceful waves through the air. The sound waves pushing force is its 'amplitude'. To make high and low sounds the speaker vibrates faster or slower. The wave rate is its 'frequency' measured in hertz or in musical terms it's note 'pitch'.

From waves to music a musical instrument produces a unique waveform. When played just one note has low mid and high range vibrations combined into a complex sound wave. The most apparent frequency of a vibrating guitar string may be a g note and yet many smaller twitches and movements travel through the string at the same time producing tones that your ear also detects.

The human ear can discern sound vibrations between about 20 hertz and 20 000 hertz. That's a lot of available frequency to work with. High frequencies ride on the back of rumbling bass waves to reproduce an entire orchestra in one impossibly complex unified waveform. It's entirely possible for one speaker to handle the whole sound, like earphones for example. However, in large spaces where sound waves need to travel further, some audio setups divide specific frequency ranges between specially designed speakers. A speaker intended for low slow frequencies has a much different design than speakers made for high and fast frequencies.